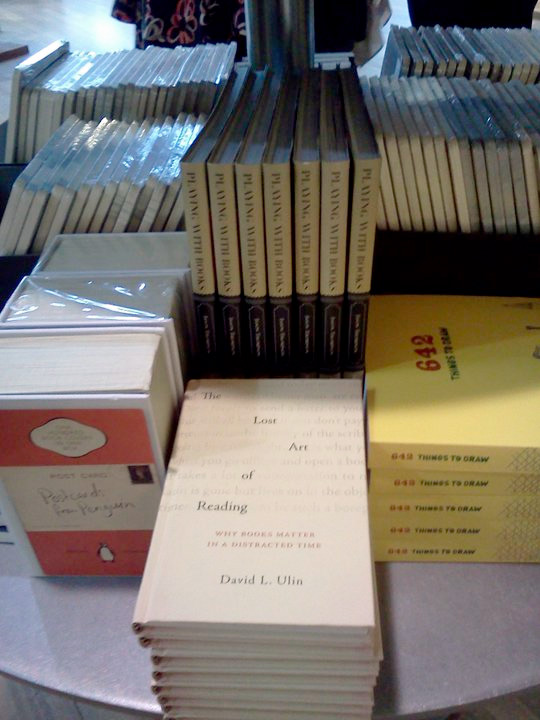 Lunch and the Lost Art of Reading, Feb. 9

Posted on February 9, 2011 by davidlulin

Diesel, A Bookstore in Brentwood is very excited to present a Literary Luncheon with acclaimed author David L. Ulin in celebration of his newest book, The Lost Art of Reading, a timely and important book about the value of reading in an increasingly digitized and distracted age. This event will take place on Wednesday, February 9 at 12pm at the Wilshire Restaurant in Santa Monica. This is a ticketed event; please see below for details.

David L. Ulin was the book editor for the Los Angeles Times for five years, and is currently the book critic for the Times. He is on the board of the National Book Critics Circle, and he writes regularly for the LA Weekly, Chicago Tribune, Newsday, and the Los Angeles Times. His work has also appeared in  the New York Times Book Review, the Atlantic Monthly, and the Nation, as well as on NPR’s All Things Considered.

***Please Note*** Tickets for this event are $60, and include a signed copy of The Lost Art of Reading and lunch with David L. Ulin. Tickets should be purchased in advance at Diesel, A Bookstore in Brentwood (310-576-9960) or Diesel, A Bookstore in Malibu. Looking forward to seeing you at Wilshire Restaurant. 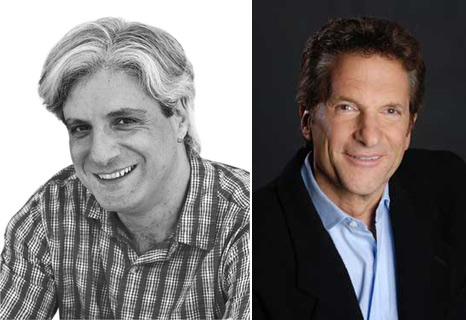 This is a special, almost defining program for Writers Bloc, a program that explores the purpose of reading literature.  David Ulin’s book, The Lost Art of Reading: Why Books Matter in a Distracted Time, is an intimate and personal exploration of reading novels (and for discussion’s sake, we’ll include the occasional nonfiction work) for the sake of enjoyment, enrichment, stimulation and intellectual engagement.  David examines why reading matters, how thinking about ideas presented in literature can actually help us move forward as a civilization.  At the same time, David gets into the things that distract us most—the siren call of emails, for instance—and while these distractions aren’t dreadful for humanity, we lose some footing as our attention is pulled elsewhere.  Ebooks can broaden our reach, can increase our exposure to books and authors we might not otherwise meet.  But before we talk about ebooks, we need to get back to reading, to literature, to engagement with story and author in the first place.  David is a distinguished editor, having done time as Editor of the Los Angeles Times Book Review, and editor of several terrific anthologies of Los Angeles-based literature.  Happily for Writers Bloc, David has been a moderator for many Writers Bloc programs as well.

Peter Guber is a master of the universe of pop culture.  He’s behind some of the most successful Hollywood blockbusters, including Shampoo, Taxi Driver,  The Way We Were, Midnight Express,Rain Man, Batman, The Color Purple,and too many more to name.  But we’ve got to mention Sleepless in Seattle, Groundhog Day, and Philadelphia.  He exerted enormous muscle in television as well— in sitcoms such as Seinfeld, Mad About You, and so many others.  Game show fans will appreciate his revamping of Jeopardy.  He’s run studios, production companies, record labels,  and an NBA team with staggering success.  In his spare time, Guber is a professor at UCLA’s School of Theater, Film and Television, runs Mandalay Entertainment, and has a new book coming out in March, called Tell To Win: Connect, Persuade and Triumph with the Hidden Power of Story.

7:30 PM at the MGM Building, 10250 Constellation Blvd., Century City. Park in the Century City Shopping Center (The Westfield Mall) directly across the street. Tickets $20 (cash or checks only please).

PEN/USA presents David L. Ulin in conversation with Arthur Salem, discussing The Lost Art of Reading at The Ink Spot in San Diego from 4-6pm.

In an ever-more-distracted world, how do we pause?

Up next: Book Soup December 15

David L. Ulin will read from and discuss The Lost Art of Reading Wednesday, December 15 at Book Soup in West Hollywood at 7pm.

Host Andrew Tonkovich talked to David L.Ulin about The Lost Art of Reading on Bibliocracy, aired on KPFK 90.7FM Wednesday November 24. The archived show, soon to be posted here, will be available for 90 days. 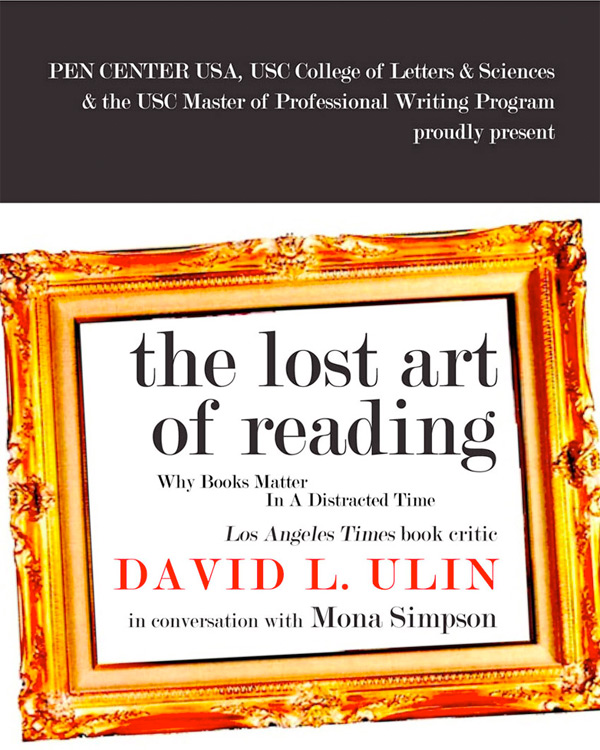 THE LOST ART OF READING: Why Books Matter In A Distracted Time

Please join us for an evening of thought-provoking discussion

Free & Open to the Public.
Book Signing & Reception will follow the main event

November 10: Belonging to all of us

Posted on November 8, 2010 by davidlulin 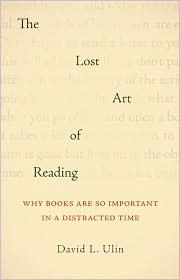 This week, David L. Ulin is blogging at Powell’s about The Lost Art of Reading:

Here’s a question I think about a lot: What are our expectations of nonfiction? I’m not referring to the morass stirred up by the term “creative nonfiction” because it goes without saying that all nonfiction is creative, as is all writing, all attempts to frame the chaos of existence and give it a shape. But more directly, do we come to nonfiction looking for a narrative, and if so what does that mean? I’ve spent much of yesterday talking (or virtually talking) to students about these issues, about the need for writers to shape material, even (or especially) if that material is true.

This was one of the challenges I faced in The Lost Art of Reading, how to give an idea that was, in essence, abstract (why is reading important? what does it offer us?) a concrete form. For me, the solution was to frame it with a story, the story of my attempt to read The Great Gatsby with my teenage son Noah, a story that, for me anyway, catalyzed the larger issues I wanted to address. It made sense because one of the fundamental arguments in the book is that we need story, that we are hard-wired for it as a species, that, as Joan Didion wrote more than 30 years ago, “We tell ourselves stories in order to live.”

Yet Didion, it must be said, also recognized the limitations of that argument, the way the same stories that shore us up us also let us down. She follows her famous line with one far less remembered: “Or at least we do for a while.”